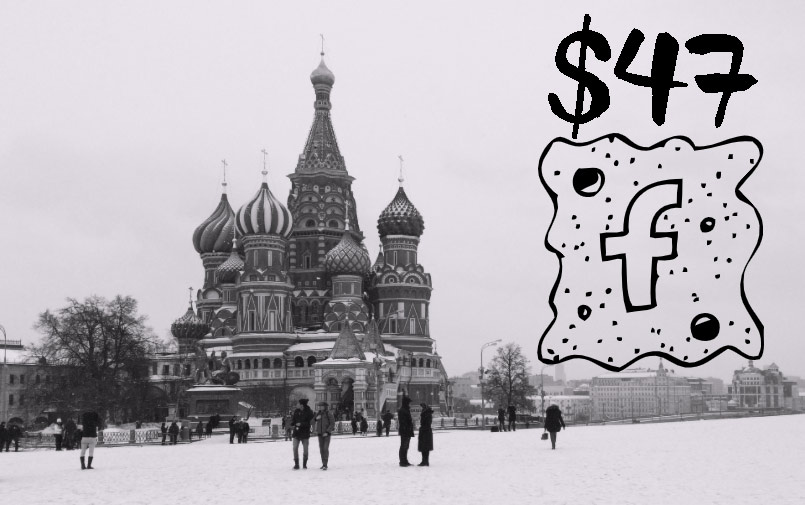 In another surprising turn of events in the Facebook privacy issues saga, Russia has fined Facebook 3,000 rubles, or around $47, for non-compliance with the country’s Data Localization law.

You were probably expecting to see a couple of zeros on the end of that $47, but no, bizarrely this is the amount Russia had decided to fine the social media giant.

Roskomnadzor, also known as The Federal Service for Supervision of Communications, Information Technology and Mass Media, is the Russian federal executive body responsible for censorship in media and telecommunications. They also oversee compliance with laws around confidentiality and the processing of personal data, among other areas.

According to the case materials presented in the Moscow courtroom, Facebook did reply to the request but refused to submit the information by claiming that the personal data of facebook users “isn’t segmented by the geographical principle.”

3,000 rubles is the minimum fine allowed for the failure to disclose the information, and the maximum is 5,000 rubles ($78).

The reason Russia wanted to know the location of the servers is because of a law that requires the personal data Russia’s citizens to be stored within the country, this also applies to foreign tech companies. The Russian Personal Data Law came into force in September 2015 and was an attempt to protect Russian citizen’s personal data from the NSA’s mass surveillance of people, as described by whistleblower Edward Snowdon.

Roskomnadzor has a history of going after social media companies over privacy and security concerns. In 2016 Russia blocked LinkedIn in the country after they failed to set up servers in Russia to store the data of Russian citizens.

In a statement, LinkedIn said:

Roskomnadzor’s action to block LinkedIn denies access to the millions of members we have in Russia and the companies that use LinkedIn to grow their businesses. We remain interested in a meeting with Roskomnadzor to discuss their data localization request.

They [LinkedIn] have a bad track record: Every year there’s a major scandal about the safety of user data,

Russia’s action against LinkedIn seems disproportionately severe when you compare it to the $47 fines Twitter and Facebook have received, however, this may not be the end of the matter for the social media companies. If Facebook and Twitter continue to fall short of Roskomnadzor’s expectations, they may see themselves getting banned also.

These fines may be the first step in a larger legal process aimed at getting Twitter and Facebook blocked in Russia, a way to get the legal ball rolling. The fact remains that Russia has rarely enforced these laws, with the exception of LinkedIn, and it now appears that they are closing in on Twitter and Facebook, asking them to comply or face the consequences. At the moment the consequences are a $47 dollar fine, but we’ll see what the future holds.