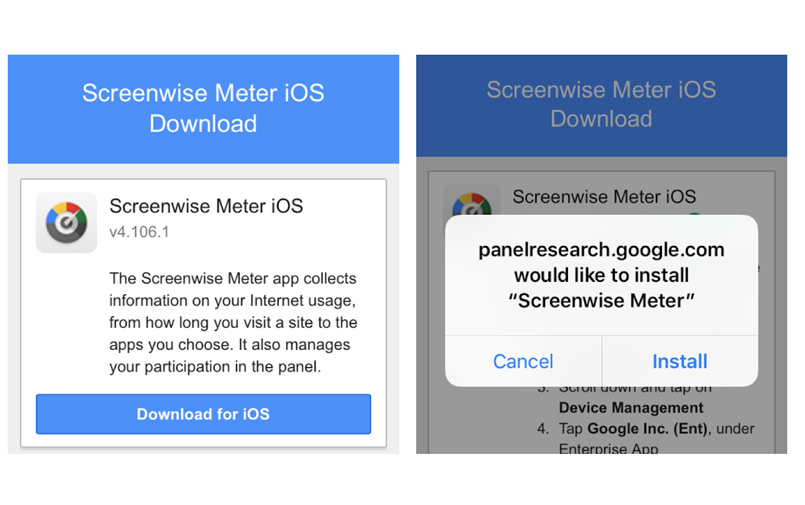 Google was forced to pull a research app that bypasses the Apple terms of service, similar to a recent Facebook app that was found doing the same thing. These apps were monitoring and analyzing user data in exchange for offering the users rewards. The app was removed on January 30th.

The application, Screenwise Meter, was found by TechCrunch

and brought into the light. It turns out that Google was offering users ages 18 and up (or as young as 13 if part of a family group) special codes for gift cards and services in exchange for giving up their personal usage data. This app was used to monitor screen based activity to help get an edge over competitors.

Unlike Facebook, Google was far more upfront about the data that was taken and used, as well as their process for doing so. While there was this openness on behalf of Google, the worry is that financial incentive may lure in users who don’t have a real comprehension of what this data is used for. They issued an apology upon pulling their app from the Apple Store.

“The Screenwise Meter iOS app should not have operated under Apple’s developer enterprise program — this was a mistake, and we apologize. We have disabled this app on iOS devices. This app is completely voluntary and always has been. We’ve been upfront with users about the way we use their data in this app, we have no access to encrypted data in apps and on devices, and users can opt out of the program at any time.”

While Facebook has had recent issues with the same types of VPN software, they’ve received severe backlash for their apps, mainly after they stayed closed-lipped about their systems. Apple, in response, has pulled nearly all of their internal IOS applications for a few days, causing significant disruption to their workflow.

Google, however, still received punishment, having their internal applications shut off as well. Both Apple and Google were very open about trying to come to a conclusion very quickly.

Related Topics:Google
Up Next