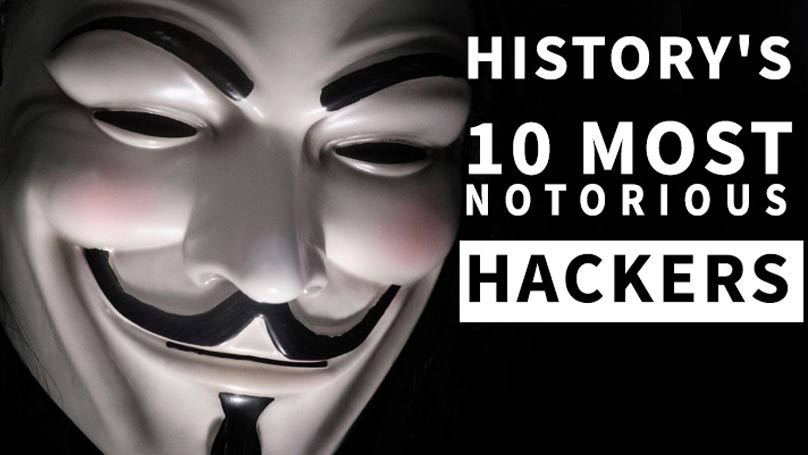 Hackers come in many different forms, and historically the term was used to mean people who tested and build new systems to make them better, what we call white hat hackers today. We’re not concerned with white hat hackers in this list, although they provide an invaluable service. In this list we are looking at black hat hackers, the people that epitomize cyber criminality, the hackers who break and destroy systems, steal data, or sometimes, just want to watch the cyber world burn.

You probably know Ryan Collins as the hacker who stole naked photos of female celebrities in 2014. Ryan conducted a 2-year phishing scan to gain passwords of over 100 people, including celebrities. He managed to hack his way into the personal information of Jennifer Lawrence, Rihanna, Avril Lavinge, and Aubrey Plaza. Ryan pleaded guilty to federal hacking charges in 2016 and received an 18-month prison sentence.

Gary McKinnon is a Scottish hacker who was accused in 2002 of conducting the “biggest military hack of all time.” McKinnon was accused of hacking into 97 US military and NASA computers over a 13 month period. He claims he was looking for evidence of aliens and found images of extraterrestrial spaceships. The US wanted McKinnon to be extradited to the states to stand trial, but Theresa May, now Prime Minister of the UK, at the time Home Secretary, withdrew the extradition order.

Albert Gonzalez is an American hacker who conducted a large-scale credit card theft and sold over 170 million stolen ATM and card numbers between 2005 and 2007. This allowed Gonzalez to live a lavish lifestyle, staying at luxury hotels and throwing himself a $75,000 birthday party. He allegedly had a currency counting machine to count his haul, but this broke and he had to count $340,000 by hand, which he wasn’t happy about.

Lizard Squad is a hacking group who conduct Distributed Denial of Service attacks (DDoS) to bring down major companies. These attacks flood servers with information which ultimately brings the server offline. They have quite an impressive list of companies as their victims. PlayStation, Xbox, Facebook, Instagram, Twitter, and a UK government site have all fallen victim to their malicious attacks.

Also known as the “homeless hacker” for his transient lifestyle, Lamo hacked into several high profile networks belonging to The New York Times, Yahoo! and Microsoft. Lamo was ordered to pay $65,000 in restitution for these crimes, and serve a 2 years probation. He is best known for reporting Chelsea Manning to US investigators in 2010. Chelsea Manning was a US solider responsible for leaking hundreds of thousands of sensitive documents to whistleblowing website, WikiLeaks.

Levin was a Russian hacker who broke into Citibank’s computers in 1995, stealing nearly $10 million. He hacked into the computers and then rewired the funds into various global banks accounts that he could later access. He did all of this without the internet. Levin tapped into telecoms systems and listened to customers sharing their account information. Once caught, he pleaded guilty to the charge of making $3.7 million in unauthorized transfers and was sentenced to three years in prison and a $240,000 fine to be paid to Citibank.

SEA is a group of hackers that first surfaced in 2011, supporting Syrian President Assad. The SEA has conducted a range of attacks with different MOs, for example spamming, malware, phishing, DDoS and website defacement. The targets of these attacks were political opposition groups and western organizations since the west collectively opposes Assad’s regime for their use of chemical weapons.

May Ray Butler was an online security expert who stole nearly 2 million credit card numbers accounting for an estimated $86 million in fraudulent charges. Iceman charged $100 an hour as a security consultant, but turned his attention to a more profitable hobby. He hacked into financial institutions, credit card processing centers, and other secure computers to obtain credit card information. In 2010 he was sentenced to 13 years in prison and ordered to pay $27 million in restitution. This was the longest sentence ever given for hacking charges at the time.

One of, or probably the most famous hackers on the list, Anonymous. Anonymous is an international hacktivist group best known for their DDoS attacks against governments, corporations, and the church of Scientology. The group is loosely organized and conducts attacks based on ideas, rather than directives from a leader. Anyone can declare themselves a member and then participate in the ongoing cause.

Bogachev goes by the aliases “lucky12345” and “slavik” and is responsible for a racketeering enterprise that installed malicious software, called “Zeus” on victim’s computers. The software stole bank account numbers, passwords, and PII. Bogachev is known to be living in Russia and is wanted by the FBI, with a $3 million reward leading to his arrest and or conviction.