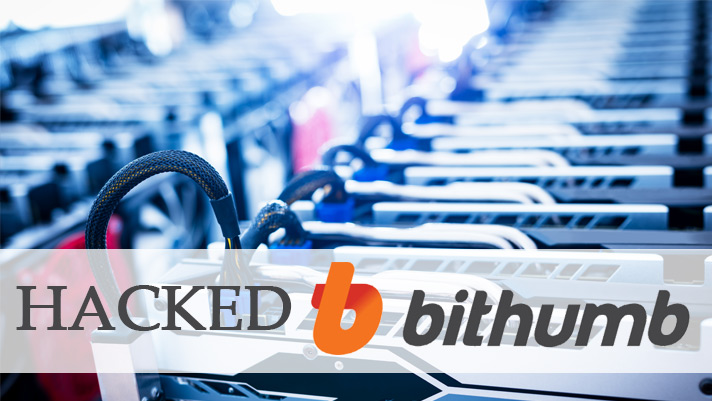 Hackers have stolen almost $19 million in cryptocurrency from Bithumb. Bithumb is a popular South Korea cryptocurrency exchange that has faced hacking issues in the past.

On Friday 29 March reports of a hack on Bithumb started to emerge on Twitter after cryptocurrency monitors spotted suspicious transactions on the platform. These monitors spotted 3 million EOS, worth around $13 million, being moved from Bithumb’s wallet to an unknown location. It wasn’t until 24 hours later on 30 March that Bithumb released a statement about the attack, leading some people to believe they knew about the attack and were slow to act.

Bithumb is still investigating the attack but believes it may have been conducted with the help of a company insider. The company said:

“As a result of the inspection, it is judged that the incident is an accident involving insiders because the external intrusion path has not been revealed until now. Based on the facts, we are conducting intensive investigations with KISA, Cyber ​​Police Agency and security companies.”

In June 2018 they were hacked once again, this time with a major attack. In this attack, $32 million worth of cryptocurrency was stolen. Around half of the stolen funds were able to be recovered following this attack.

Bithumb is currently working with other major cryptocurrency exchanges in order to recover the losses for this attack, and crypto enthusiasts remain hopeful that they will be able to do it again!

CipherTrace, a blockchain intelligence company, has released a 2019 report which identifies internally orchestrated cryptocurrency theft as a growing threat in the industry.

In 2018 $1.7 billion worth of cryptocurrency was stolen by hackers according to CipherTrace. This is huge! $1.2 billion was stolen from January 2017 to May 2018, meaning this industry is not showing any signs of slowing down but is instead increasing year on year.

A blockchain investigation company called Chainalysis also revealed that two criminal groups are responsible for approximately 60% of all cryptocurrency stolen from exchanges.

If Bithumb’s suspicions are true, and an insider was responsible for helping the attack go ahead, then this will pose a new type of threat to crypto exchanges. Previously it has been unknown groups of nefarious hackers that have managed to hack their way into the exchange and quickly distribute the crypto coins elsewhere. It is extremely concerning if employees of crypto exchanges are now also thinking they could benefit from cooperating with hackers.

Chainalysis is also working with cryptocurrency exchanges in order to warn them about incoming funds from illicit wallets. In a statement to Sophos, they said:

These insights, we hope, will help the industry work together to protect themselves against bad actors and ultimately build trust in cryptocurrency and help it become a more mainstream way of transferring value.