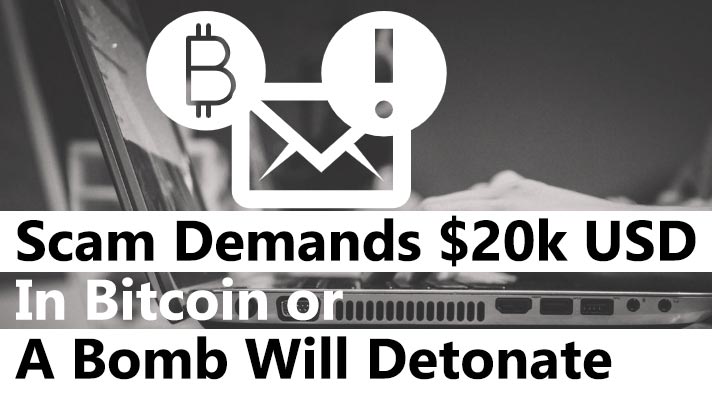 A new extortion scam email has been circulating, with a menacing message. The email campaign, which originates from Russia, includes a bomb threat. The email states that if the victim doesn’t send $20,000 USD worth of bitcoin, the bomb will detonate. The campaign is praying on people’s fear of bombs and urging them to act promptly. The emails contain subject lines like “My device is in your building”, “No need to be heroic” and “Rescue service will complicate the situation.”

The emails seem to be targeting people in the US and contain information about the explosive, saying the device is made of “lead azide”, “trinitrotoluene” [sic]. It states that the explosive is in the building, and if the payment of $20,000 USD of bitcoin isn’t made, then the device will detonate at the end of the day.

Some excerpts from the email are below:

“I write you to inform you that my man has hidden the bomb (tronitrotoluene) in the building where your company is located.”

“My mercenary is controlling the situation around the building. If he sees any strange activity or cops he will blow up the device.”

“I can call off my mercenary if you make a transfer. You pay me 20’000 USD in Bitcoin and explosive will not detonate”

The email has some grammar mistakes which suggest the actors are not native English speakers.

Defender, a security researcher has stated they have captured over 15,000 samples of these emails, but the campaign is now starting to slow down. While the US has been the main target, Defender has revealed that the emails have also been sent to companies in Canada, UK, New Zealand, Switzerland, and Sweden.

The New York Police department has started to investigate the campaign. They have stated that they don’t deem the threats to be credible.

Related Topics:Bitcoinbombextortion scam
Up Next