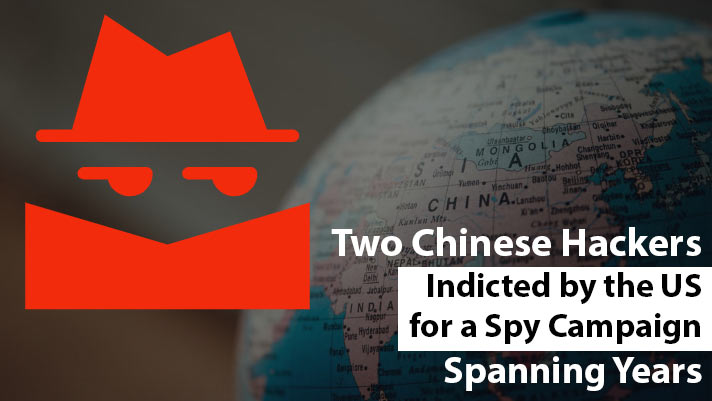 On Thursday 19 December the US Department of Justice charged two Chinese hackers with stealing substantial amounts of data from over 45 government organizations and US private companies. The amount of data is thought to be in the hundreds of gigabytes.

Some of the target organizations are significant, for example, NASA Goddard Space Center and Jet Propulsion Laboratory; U.S. Department of Energy’s Lawrence Berkeley National Laboratory; and the Navy are among those affected.

The Chinese hackers have been identified as Zhang Jianguo and Zhang Shilong, and are believed to be members of the infamous APT10. According to FireEye, APT10 is a Chinese cyber-espionage group that FireEye has tracked since 2009. They have historically targeted construction and engineering, aerospace, and telecom firms, and governments in the United States, Europe, and Japan.

The DoJ’s indictment alleges that the dup acted in association with the Chinese Ministry of State Security’s (MSS) and that the hacking operation has stretched back years. The documents stolen are sensitive documents, intellectual property and the personal information of US citizens.

The DoJ’s press release on the topic states:

“From at least in or about 2006 up to and including in or about 2018, members of the APT10 group, including Zhu and Zhang, conducted extensive campaigns of intrusions into computer systems around the world. The APT10 Group used some of the same online facilities to initiate, facilitate and execute its campaigns during the conspiracy.”

It is estimated that the personal information of 100,000 Navy personnel was stolen in one attack by the duo. This information includes Social Security numbers, salary information, dates of birth, personal phone numbers and names.

“Healthy competition is good for the global economy, but criminal conduct is not.  This is conduct that hurts American businesses, American jobs, and American consumers,” said FBI Director Wray.

“No country should be able to flout the rule of law – so we’re going to keep calling out this behavior for what it is: illegal, unethical, and unfair.  It’s going to take all of us working together to protect our economic security and our way of life because the American people deserve no less.”

Related Topics:chargedChinese hackers
Up Next